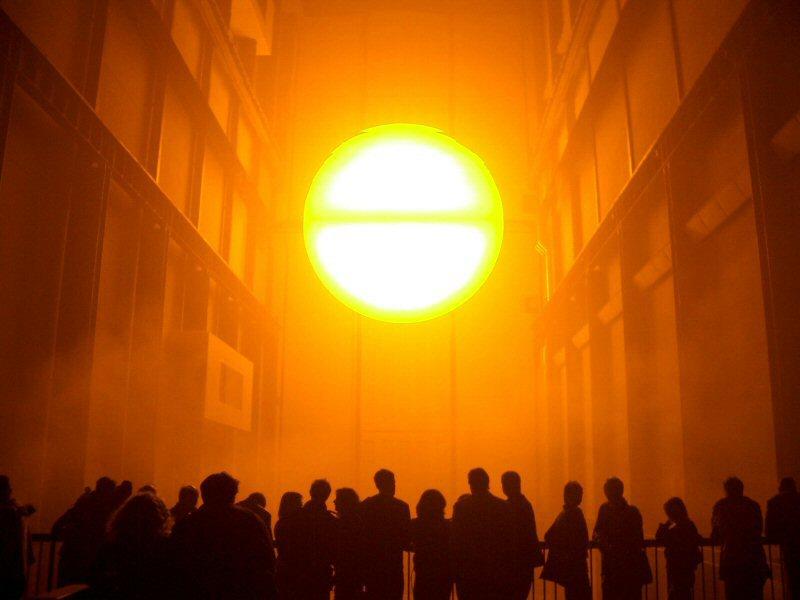 A source of inspiration for LYS is the Danish/Icelandic contemporary artist, Olafur Eliasson. He works in the cross-field of art and science and uses both artificial and natural light in his installations. Especially two aspects of Eliasson’s work is interesting in the eyes of LYS; One, is the fact that his work exists in the perception of the observer. He describes this experience, the moment of observing, as ‘seeing yourself sensing’. The other aspect is the use of the properties of light as a material.

A specific example of these aspects is the installation, The Weather Project, made for the Turbine Hall of Tate Modern London in 2003. The artwork was a representation of the sun and sky that was dominating the entirety of the exposition space. He created a giant semi-circular form made up of hundreds of mono-frequency lamps. The arc was repeated in a mirror overhead which produced a sphere of radiance linking the physical space with the reflection. Typically used in street lighting, mono-frequency lamps emit light at such a narrow frequency that colours other than yellow and black become invisible. This effect transformed the visual field around the sun into a massive landscape.

“The weather project tells of the climate and of its social effects, in the context of a museum, Tate Modern, which is located at the heart of a large post-industrial City. In Eliasson’s view, the weather acts as ‘nature’ in the urban context, for, even though it is possible to control the climate inside buildings, it remains out of human control and can never be forecast with certainty. By introducing ‘natural’ phenomena into a cultivated setting, be it a city street or an art gallery, Olafur Eliasson encourages the viewer to reflect upon his understanding and perception of the physical world that surrounds them.” Marcella Beccaria. ‘O E, Olafur Eliasson’. (London: Tate Publishing, 2013)

Eliasson’s artwork raises the question, “Have we stopped trusting nature and our senses?” In relation to light exposure, perhaps, we have become too dependent on artificial light and the price we pay is health-related problems. When reflecting upon the invention of artificial light, the benefits are that it allows us to stay awake and be active after sundown and inside buildings. Which is useful, however, the fact that natural light changes colour and intensity throughout the day has not been taken into consideration. This means that we find ourselves in modern urban societies spending almost 90% of our time indoors illuminated by artificial light that is static. We receive the same colour and intensity throughout the day.   Olafur Eliasson is reminding us to sense and allowing us to reflect upon the physical world around us.

LYS is then asking the question: What are the physiological and behavioural changes occurring from different intensities and wavelengths of artificial light, and how can we design a device to sensitise humans to these changes?

LYS is on the list: 20 hottest wearable tech startups to watch in 2017